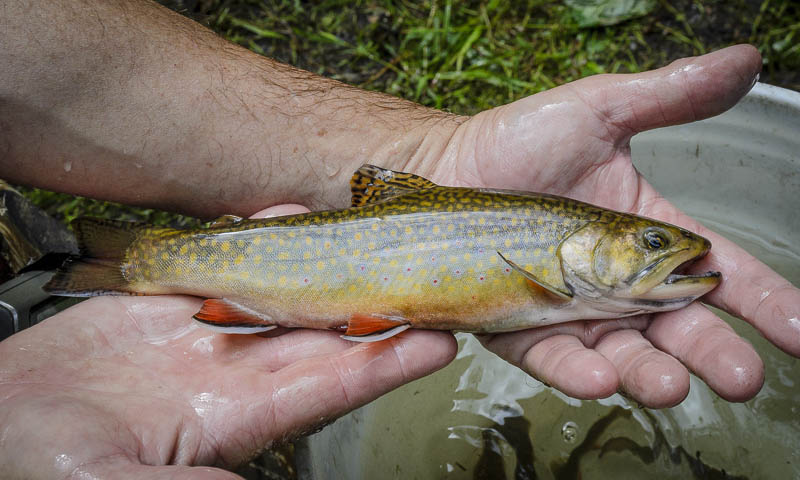 Red Brook is one of only a handful of tidal streams in Massachusetts that support Salter Brookies that migrate between fresh and salt water. - Photo Sea Run Brook Trout Coalition.

Trout Unlimited  at the chapter, council and national level is opposing a proposed zoning change in Wareham, Massachusetts that will harm an environmentally sensitive drinking-water aquifer and severely threaten or possibly eliminate a population of Sea Run, or “Salter” Brook Trout in nearby Red Brook, whose headwaters flow out of the same aquifer.

Urgent action is needed to fight the creation of a 963-acre “Hospitality, Recreation and Entertainment District” on undeveloped parcels of pine barren habitat which protect Red Brook’s headwaters before a town meeting vote on the rezoning scheduled for April 10.

The Notos Group, a Quincy development company whose executives are responsible for Marina Bay and the 27-hole Granite Links golf course and facilities center, drafted the zoning by-law for the Planning Board and lobbied for the change. Notos is looking to develop 275 acres within the proposed district and previously presented plans for a casino, racetrack, hotels and multi-family housing on the site. Notos has since withdrawn that proposal, but it is anticipated they will re-apply for it or a similar project permit if the zoning change is approved.

Salter Brook Trout, along with other migratory fish such as eels and river herring that move back and forth between fresh and salt water, depend on clean flowing water all year around. The system simply cannot withstand further water removals than currently exist nor can it handle additional loads of pollution.

The Southeast MA Chapter of Trout Unlimited, along with the Massachusetts Council and Trout Unlimited National have spent 30 years working to restore Red Brook, improve and enhance its habitat working with the Massachusetts Division of Fisheries and Wildlife and The Trustees of Reservations. Close to $4 million and tens of thousands of volunteer hours have been spent to date on the entire restoration project.

To fight the threat to Red Brook, and future efforts to protect salter brook trout, the Massachusetts Council has established the Save Our Salters Committee and fund which will use donations from members, supporters, chapters and partners to advocate against short-sighted proposals like this, participate in efforts to conserve open space in these watersheds, work to restore habitat, stream flow and fish passage in salter waters and take any other actions which further the cause of salter brook trout and the lands and waters they depend on for life.

The Massachusetts Council of Trout Unlimited is a grassroots conservation organization dedicated to protect, reconnect, restore and sustain the region’s coldwater resources.

Part of the National Trout Unlimited organization, founded in 1959, the Massachusetts-Rhode Island Council of Trout Unlimited is the unifying body region wide, connecting more than 4,500 members spread among 13 chapters.

Through advocacy, education and partnerships with other statewide conservation organizations, the Council works towards improving the ecological health of rivers and streams throughout the state.

Our motto, taken from one of Trout Unlimited’s founding members is, “If you take care of the fish, the fishing will take care of itself.”

The Massachusetts Council is a non-profit organization with 501(3)c status under the umbrella of Trout Unlimited National and the following organizational hierarchy:

Please confirm that you're ready to draw winners

Once you click "DRAW WINNERS", your drawing cannot be undone.

Enter the URL for your live stream
Include a note to your in the email (optional)
A link to your live stream will be automatically included in this email.
HOW DO I LIVE-STREAM MY CAMPAIGN?
When you click "Start Live Stream", your page will start displaying your live-stream video feed at the top of the page. Once you're done with the live stream, you'll be able to return your page back to its previous state.

Your page will return to its previous state when you end the live stream.
settings

*Required fields are highlighted in red.

We've been alerted to the problem and will fix it right away. In the meantime could you please try this again? You can also send us an email at if you'd like to discuss it.